The Škampa Quartet is among the very finest of an outstanding group of current Czech string quartets that has represented their country in major Concert Halls around the world for twenty five years.

Through their mentors, the legendary Smetana Quartet, they trace their roots to the earliest quartets - such as the Bohemian Quartet - in a land described in the 18th century as the Conservatoire of Europe and that remains, to this day, the very cradle of European Chamber Music.

To this innate musicality they have added their own particular research to inform their understanding of the folk-song and poetry, rhythms and dance from which their native music grew - to the extent that their recordings of the quartets by Janacek and Smetana particularly are quoted as the bench-marks against which other performances are judged.

This research resulted in, among other things, the production of an illustrated talk - ‘Janacek and his Moravian Roots’ - and led to collaboration with singer Iva Bittova which successfully crossed many musical boundaries.

Prizes at International Competitions, Awards from the Royal Philharmonic Society and others - and appointment as the first-ever Resident Artists at Wigmore Hall - marked the solidity of their early years and provided recognition which led to invitations to perform at major Festivals world-wide including Prague Spring, Schwetzingen, Edinburgh, Schleswig-Holstein and Melbourne.

From the beginning they have established a close relationship with BBC Radio 3 resulting in regular broadcasts from Wigmore Hall, St John’s Smith Square, LSO St Luke’s and the Chamber Music Proms.

The Škampa quartet have been award-winning recording artist for Supraphon for most of the Quartet's career. They are now also among the elite artists whose performances have been selected for release on the Wigmore Hall Live label.

Education has long been an important facet of their work, and one that they find particularly rewarding. They teach in many places around the world but particularly at the Royal Academy of Music in London where they were appointed Visiting Professors of Chamber Music in 2001. 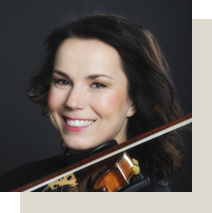 The Czech violinist Helena Jiříkovská has won her brilliant reputation on many fields. She is a sought after soloist as well as the first violin of the ŠkampaQuartet and leader of the Talich Chamber Orchestra. Apart from active music making, she is a keen teacher and especially treasures coaching chamber ensembles ,While studying in Pilsen, Prague and Berlin succesively, she alwáys enjoyed taking part in international master classes and worked with several outstanding musicians (Isaac Stern, Shlomo Mintz, Jacques Ghestem, Eduard Grač, Jan Tomeš, Jiří Tomášek and Jindřiška Holotová to name a few),As a soloist, she has peďormed with most Czechmajor orchestras, as weli as with Bamberger Symphoniker and MDR Sinfonieorchester Leípzig.

Her main focus lies in the field of charnber music. She forrnded the highly acclaimed Janáček piano Trio in 20a2 andconcertized with them till2008. She then became the first vioiin of the Škampa Quartet, with whom she enjoys a blossoming world wide career and performs in the major concert venues (Wigmore Hall, Canregie Hall, ConcertgebouwAmsterdam...) Her numerous chamber music partners include Tom Poster, Kathy Stott, Melvyn Tan, Nobuko Imai, Karl Leisteq Robert Plane, Ib Hausmann, Ruby Hughes, Iva Bittová.

The members of the quartet are visiting chamber music professors at the Royal Accademy of Music in London arrd teaches at numerous music festivals (Dartington, Lake District...) 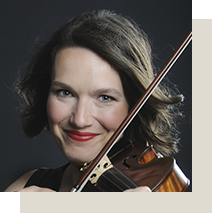 Graduated from the  Academy of Performing Arts in Prague (violin class of Petr Messiereur) and the Guildhall School of Music and Drama in London, where she studied violin with Krzysztof Smietana and baroque violin with Rachel Podger.

Member of the Škampa Quartet and ArteMiss Piano Trio, she focuses mainly on chamber music and cooperates with early music ensembles (Collegium 1704, Musica Florea, Ensemble Inégal). She finished her doctorate studies at the Academy of Performing Arts in Prague where she focused on the authentic performing praxis of  L.v Beethoven's Violin Concerto,  which she performed with Musica Florea.Her newly developed passion is early music education in a small violin class of 3+ year olds. 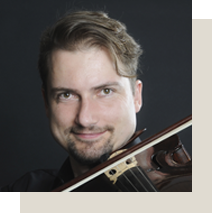 Martin Stupka was born in Prague and gained his first musical experiences from the age of 5 on the recorder, the violin and the accordion. He began to study the viola at the age of 14 at the Jan Neruda Music High School in Prague, continuing his studies at the Prague Conservatory and ultimately in Berlin at the Hanns Eisler Academy of Music and at the University of Arts. During his studies he took part in lessons and masterclasses with artists such as Libor Nováček, Karel Doležal, Volker Sprenger, Yuta Nishiama, Tabea Zimmermann, Wolfram Brandl, the Artemis Quartet with Natalia Prischepenko, and Günter Pichler.

Martin's musical activities are very wide-ranging and include collaborations across various musical genres : chamber music (Škampa Quartet), chamber orchestra (with the Talich Philharmonia Prague and the Prague Chamber Orchestra); baroque music (with Collegium Marianum, Musica Floera and Collegium 1704); jazz (with P.F.O., Octothorpe and Mira Mode Orchestra); and folk music (with Rosénka). With those ensembles he has toured widely within Europe and further afield.

Martin Stupka has performed at the JAZZ Baltica festival (with the Gerdur Gunnarsdottir Quartet and the Don Friedman Trio) and at the Volksbühne Theater Berlin in a play "Antigone/Elektra" by the director Werner Schroeter.

As a soloist, together with Dana Oerterová and the Piccola orchestra from Prague, he won the "Martinů Prize" at the festival Youth Stage in Carlsbad in 2004. In 2016, Martin performed (with Jan Mráček) the Sinfonia Concertante by Mozart in original scordature.

Martin Stupka has also given masterclasses at the String Master Courses in Dobřichovice. 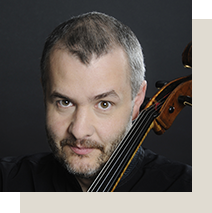 Lukas Polak started to play violoncello when he was six. Since the very beginning, he was a member of a chamber orchestra and a piano trio. He graduated from the Brno Conservatory and The Academy of Performing Arts in Prague, Czech Republic; when at the Academy, he was awarded a scholarship at the Conservatoire National Superieur de Musique et de Danse, Paris, under Jean-Marie Gamard. He also participated in master classes with Daniil Shafran and Jiri Barta.
Lukas Polak performs as a solo cellist with the Pilsen Philharmonic, the Hradec Kralove Philharmonic Orchestra, the Talich Chamber Orchestra, and the Moravian Chamber Orchestra. He has been collaborating with several pianists: Martin Kasik, Miroslav Sekera, and Stanislav Gallin.
‍
Lukas Polak is an experienced chamber music player thanks to his long-time membership in the Skampa Quartet (www.skampaquartet.cz), performing across Europe, the USA and Japan. The Skampa Quartet has played on the most prestigious stages all over the world: Wigmore Hall, London; Concertgebow, Amsterdam; Chatelet, Paris; Musikverein, Vienna; Lincoln Centre and Carnegie Hall, New York; and many others. Lukas Polak has collaborated with many prominent musicians, such as Chloe Hanslip, Frans Helmerson, Jiri Barta, Kathryn Stott, Michael Collins, Ronald van Spaendonck, Pablo Barragan, Nikolai Demidenko, Itamar Golan, Melvyn Tan, Konstantin Lifschitz, Christian Poltera, and many others. He is a regular performer at the Kutná Hora International Music Festival organized by Jiri Barta. He has recorded multiple CDs for Supraphon, Champs Hill Records, Wigmorehall Live, Radioservis and other labels.
‍
Having started to play with orchestras at 12 years old, Lukas Polak also has vast experience in orchestral music. He was the principal cellist of the Prague Chamber Orchestra (often performing without a conductor), the Hilaris Chamber Orchestra (www.hilarisorchestra.com), and the Berg Chamber Orchestra focusing on contemporary music (www.berg.cz/en). For several years, he was the assistant principal cellist of the Slovak Philharmonic (www.filharmonia.sk/en) under the chief conductors Emmanuel Villaume and James Judd. He is a member of the Czech National Symphony Orchestra (www.cnso.cz/EN), playing classical music as well as crossover projects and film music; Lukas Polak works on all positions of the violoncello section, from principal cello to tutti cello.